Glassical Concepts is proud to offer you our unique hand-made desert inspired glass treasures at affordable prices. These beautiful glass pieces give an added touch to any decor. Each piece is specifically crafted to capture the spirit of the American  Southwest. 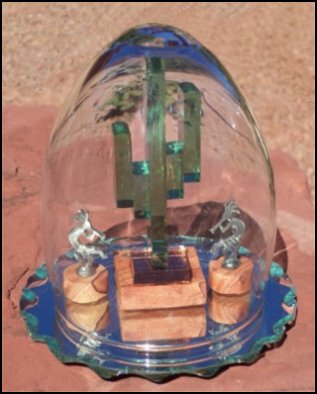 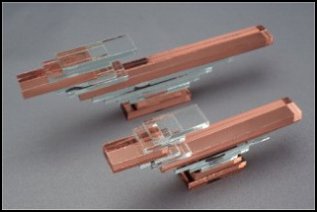 Produces glass products which are sold in numerous stores throughout the Southwest.

One of our many  specialties is Southwestern desert art, which includes many sizes of glass cactus ranging from    micro to extra-large, with colors of evergreen or clear, and your choice of bronze/mirrored or clear/mirrored bases.    These bases may include Arizona gold lettering which is optional at no additional cost.

We invite you to enjoy Glassical Concepts delightful works of glass art! 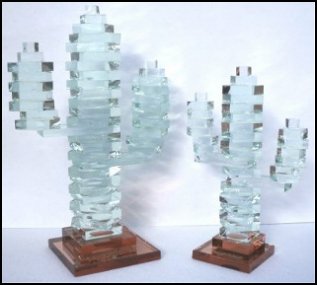 Things  to  know  about  Sedona

Glassical Concepts is based in Sedona, Arizona, a 20 square-mile city, located in the high desert under the towering southwestern rim of the vast Colorado Plateau.  It is blessed with four temperate seasons of abundant sunshine and clean air.  Characterized by massive red-rock formations such as “Bell Rock,” “Cathedral Rock,” “Coffee Pot Rock,” and “Snoopy Rock,” it is also known as “Red-Rock Country.” The stunning arrays of the red sandstone formations appear to glow in brilliant orange and red when illuminated by the rising or setting sun.

There are unique canyons, such as the spectacular “Oak Creek Canyon” which is considered at least as beautiful as many national parks.  There are creeks, mountains, forests, hiking and mountain biking trails.  You can enjoy camping, picknicking, horseback riding, golf, tennis, or birding, and it is a paradise for artists.

Historically, it was a rural ranching community located far off the beaten path, but its natural beauty became nationally known through the motion picture industry. Today, commercials and television shows still are filmed in the unsettled areas surrounding the city.

Visitors from all over the world are attracted to its world-wide reputation as a spiritual mecca and global power spot of amazing healers, intuitives, and spiritual guides.  From massage treatments, yoga, spas, salons and retreats,  ”Red Rock Country” breathes tranquility and peacefulness in the very essence of the environment for people who live in the region.

Sedona is approximately 90 miles from the Grand Canyon and is completely surrounded by natures finest
landscapes. It is one of those places you will always cherish.